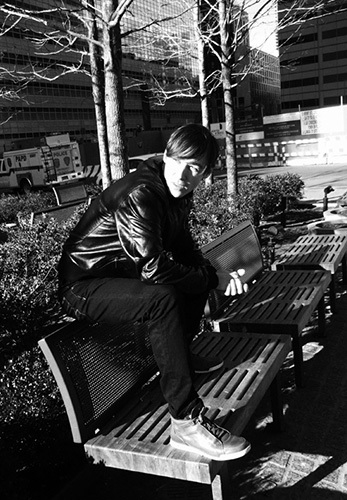 Mario Schmolka is an Austrian - American photographer, born in Vienna. After graduating from the College of Photography in Vienna, he moved to Milan. While assisting in the legendary Superstudio 13 and some of the most influential photographers, he was involved in productions for clients such as Moschino, Prada, Versace, Vogue, Marie Claire,  to name a few.

One of his latest collaborations include a project with the rapper Big Sean for Ermengildo Zegna in January 2022.

His first book "Intense" was published by the German DAAB - Verlag, followed by 2 Solo Exhibitions at the UFO - Space in Frankfurt and Westlicht Galerie in Vienna.

He was also invited to be a guest lecturer at the Art Institute of NYC.

In 2010 one image of the series "Radiance" was auctioned at the Bloomingdales Charity Gala for Haiti victims hosted by Sotheby's.

In 2014 Mario and his family after 6 years in NYC relocated to Los Angeles.

In 2019 he was honored to be part of 70 selected photographers presented in a book named “100+80 Jahre - Zeitreise durch die österreichische Fotografie”. A book showcasing the work of these most relevant photographers in 180 years of Austrian photography history.

In 2022 Mario has collaborated with Heidi Klum for the 5th time on her TV Show Germany's Next Top Model.

Mario divides his time between the U.S. and Europe.